A Chip in His Shoulder 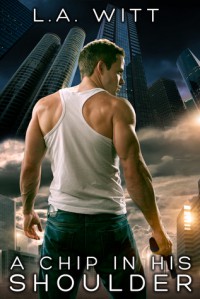 This was fairly short, but compact. It was definitely a great story and one that was quite easy to get into and like. The rest really depends on your taste. Those like me who don't really love sci-fi stories will probably like it, but if you do love stories like that, it would probably end up a favourite for you. In my case, the story was good. I was really impressed if I'm honest. And I am really glad I read this eventually.

This book isn't really like others I have read before. Sure, there are other books out there that would probably have a similar story. But I don't read sci-fi a lot, so it was a nice change for me. I loved Liam. He was a character who had gone through a lot, was angry, and tried to kill his ex. Well, to be fair, he was angry. And it was Daniel's father who paid to have him killed. But Daniel ended up surprising Liam - in a good way. So we had the romance aspect found.

There wasn't anything I didn't really like about the story. Everything was solid, writing, plot, romance. It was just a case of not being madly in love with it either. I enjoyed it. Really enjoyed it. But it won't be on my favourites list.

A personal favourite scene for me happened to be the scene towards the end. I thought it was kinda sweet, while still keeping with the mood of the story. From that scene you can see how much the two MC's really loved each other, and how they were meant to be. Although I doubt they could have pulled off a very sappy scene. It would not have fit in with the story, especially considering it started with Liam being hired to kill Daniel.

I'd recommend this story to fans of the sci-fi or someone who wants to try one.
Tweet